Eleonore, the second wife of Françoise I, died on February 25, 1558.
Eleonore of Austria (1498-1558) was the daughter of Philip, Archduke of Austria and Duke of Burgundy and of Joanna of Castile. She was the sister of Holy Roman Emperor Charles V, Holy Roman Emperor Ferdinand I, Queen Isabella of Denmark, Queen Mary of Hungary and Queen Catherine of Portugal. She was born in Louvain, Belgium.
When she was young, her parents attempted to arrange a marriage with the King of England, Henry VIII. Instead, he married Eleonore’s aunt, Catherine of Aragon. They also tried to marry her to Louis XII and Sigismund I of Poland.
In 1517, Eleonore fell in love with Frederick of the Palatinate. Charles was enraged and expelled Frederick from court. Eleonore followed her brother to Spain later that year. Charles arranged a marriage between Eleonore and King Manuel of Portugal, who had previously been married to two of her aunts, to avoid the possibility of Portuguese assistance to any rebellion in Castile.
Eleonore married François I of France on July 8, 1530. Before her marriage to François I became part of the conditions of the Treaty of Cambrai, she had planned to marry his nemesis, Charles de Bourbon.
The King of France was more interested in his mistress, Anne de Pisseleu, than his new wife. On her arrival in France Eleonore made the acquaintance of Diane de Poitiers, who became her maid of honour. There was a little over a year’s difference in their ages. Eleonore’s coronation was held March 5, 1531. It was at the tournament to celebrate the coronation that Henri first asked to carry Diane’s colours.
Eleonore’s marriage to François was purely political. She spent her entire marriage attempting to establish peaceful relationship between her husband and her brother.
Diane remained grateful to Eleonore for her kindness toward Henri and his brother, when they were held hostage in Spain as children. When the King died in 1547, Eleonore was not present, nor was she informed of her husband’s death. Diane was not pleased, and she told Henri so.
Posted by Shari Beck at 11:51 No comments:

Diane’s father, Jean de Poitiers, had been sentenced to death by beheading for his role in Charles de Bourbon’s treason against the King. Thanks to Diane’s intervention, his life was spared. 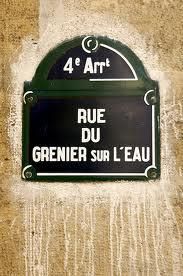 February 17, 1524 was the day that had been set for the execution. Despite the King’s promise to Diane, her father was stripped of his Order of Saint Michel and all of his titles and honors. He made his will and prayed with his priest. At three o’clock in the afternoon, his hands were tied and he was placed on a horse for the short ride along Rue Grenier-sur-l’Eau to the Place de Grève.
He was shaking from fever and he was so weak he needed to be supported by a man on either side. He was led to his place of execution, stripped of his over-clothes, and left shivering, with his head on the block, for over an hour. Finally, the King’s messenger, galloped into the square, delivered the reprieve and read it aloud. The full transcript of the reprieve can be found in “A Portrait in Black and White.”
The reprieve was granted for Jean de Poitiers’ past service to his country and his sentence was commuted to life imprisonment.
The other parties to Charles’ plot were not so fortunate. They remained in prison, and could be executed whenever the King fancied. Charles de Bourbon remained at large.
Posted by Shari Beck at 05:58 No comments:

The Marriage of Diane de France and Orazio Farnese

Diane de France, the daughter of Diane de Poitiers and Henri II of France,  turned 15 on Valentine’s Day, February 14, 1553. A day earlier, she married Orazio Farnese, Duke di Castro.
He had been born in Valentano, Italy in 1532, the second son of  Pier Luigi Farnese, Duke of Parma  and Gerolama Orsini.
Orazio’s father was the illegitimate son of Cardinal Alessandro Farnese (who later became Pope Paul III). He was often referred to as the Pope’s nephew rather than his grandson.  Orazio’s father was murdered in September of 1547.

Henri signed the marriage contract  in 1547, shortly after his coronation, when Petite Diane was only nine years old. In anticipation of the marriage, the Pope made Orazio the Duke of Castro.  He was so pleased that he sent Catherine the Golden Rose, and Diane de Poitiers a pearl necklace from the Orient.
Diane and Orazio’s happiness was to be short-lived. He was killed at the Battle of Hesdin on18 July 1553. There were no children from the marriage.
He is buried in the Church of Santa Maria Assunta, Venice.
Posted by Shari Beck at 15:09 5 comments: